I left home in the rain, 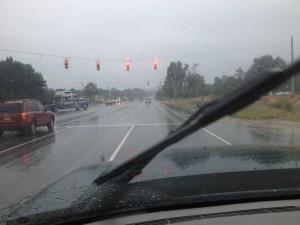 and apparently drove into a time warp. I left 20 mins late and arrived over an hour late. Still not sure how that happened. I guess the four lanes of bumper to bumper traffic with what felt like hundreds of stop lights, a self guided detour through small winding “short cut” roads and navigating a new city didn’t help much. Luckily by time I arrived in Charlotte the rain had stopped and the sun came out. But that was the end of my luck. Set up was…exhausting. It began with a white knuckle, precision drive down a park sidewalk. There was usually about 6 inches to spare on each side of my truck as I wound my way through tents, tent parts, people, carts and the occasional piece of art work. I was really wishing the truck would turn into the Knight Bus from Harry Potter and skinny itself. Once through that maze my show buddy and I threw everything out of the truck as quickly as possible and went to park our vehicles in the vendor parking lot. Unfortunately we were allotted one parking pass. One parking pass and two vehicles is never a fun math problem. A bad directions variable got thrown in just to kick things up from algebra to calculus and the amount of time we had to set up before the show started got significantly shorter. After a few U-turns and some dead end streets we managed to find a parking lot to stop in and try to regroup. Miraculously this lot was across the street from the vendor parking! But it was not labeled as such. So I decided I would run over and investigate to make sure I didn’t drive down another dead end road with nowhere to turn around. (Yes that happened, twice actually.) So I ran down to the lot, I literally ran. I ended up running half a mile down to the parking attendants in… long jean shorts and turquoise crocks. I then ran the half mile back to my truck… in long jean shorts and turquoise crocks. I would just like to say if you ever see someone running full out in jean shorts and turquoise crocks don’t look at them like they are crazy. They didn’t think they would have to run as far or as fast as they did and had legitimate reasons for it.

So we finally got the vehicles parked and walked the mile to our booth. We now had under two hours to set up. Two hours is pushing it for set up time. So the great set up frenzy began. Did I mention the sun was out in Charlotte. It was out, shinning uninhibited by cooling clouds or friendly tree shade. By time we wrestled the tent up I looked like I had taken a shower with my clothes on. Our neighbor took one look at us and started handing us water bottles in an effort to keep us from getting heat stroke. She is a former nurse, so she knew what she was talking about. Apparently we looked pretty bad. But we made it!

The tent was up, the pictures were hung and we were only 30 mins late. But there weren’t many people walking around yet, so we were in the clear. I changed into my show clothes and after they had dried a little I was left with a Jack-o-lanturn of sweat.

So there we were sweaty and exhausted with the work day just beginning! This is when the Art in the Dark kicked in. The show on Friday was from 4-9:30. 9:30!! I go to bed at 9. How we artists suffer for our art!:) Electricity was provided so we weren’t completely in the dark.

Despite having lights and being there 5 1/2 hours I didn’t sell a thing! A great start to the show….Once closing down we trucked back to the trucks and headed to our hotel, which I mistakenly booked in Huntersville-30mins away. So began the navigating in the dark with a GPS that kept losing its place. I don’t know what was wrong with it but apparently it wanted to go on an exploratory journey to find itself. But we made it despite it’s identity crisis. So we checked into our less than stellar hotel to try and grab some sleep before getting up early to try and sell some art. The only problem is that every forecast for Saturday was calling for rain…. To be continued 🙂